An Early Look At The Top Heisman Trophy Contenders In 2019 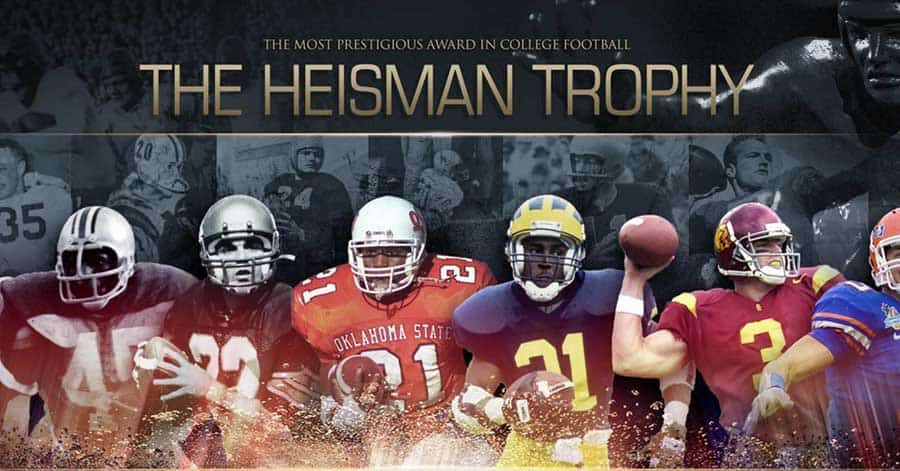 College football is just a few weeks away, and that means that training camps across the country have kicked off. With the NCAA rules about coaches and players in the offseason, we don’t get a ton of information on player progression and players that are shining in the offseason. This means that we often have a lot of time to talk about Heisman odds while not really adding new information to the mix.

Trevor Lawrence has shown up to camp as a more physically imposing QB than he was in his freshman year. Besides that development, I think it’s safe to assume that Lawrence has been polishing his game, just like every other Division I QB out there over the offseason.

Lawrence is coming into his second season as a starting QB at Clemson, and I really expect him to play to a similar level of play as he did last season. Clemson’s schedule is very easy, and I think that they will likely steamroll most competition they run into throughout the season, similar to last season.

Lawrence only threw for 2,700 yards last season in the regular season as the starter for almost the entire season, and this is incredibly alarming to me, especially for a team that DOES lack the top-end talent that other programs have.

Clemson is an elite program, but they have NOT recruited like Alabama, Georgia, or Ohio State over the past five seasons, and I think this could end up being good or bad for Lawrence’s Heisman odds this season. I am skeptical that anyone on Clemson’s schedule can make them pay for their lack of elite talent on the defensive side of the ball this year, but Lawrence’s Heisman odds depend on it.

Anyone taking Lawrence at +275 is fading Clemson’s defense that loses its FIVE best defensive linemen and has only one player that is expected to be a first- or second-round talent that can declare for the draft after this season. If Clemson coasts, I expect Lawrence’s stats to coast too.

Tua Tagovailoa has come into camp eager to learn, and that is my biggest criticism of him to this point. Tua is NOT good against defenses that can hold their own against Alabama’s receivers and offensive line. The good news for Tua is that there are MAYBE two teams that could put up that test this year.

I think that Tua was underwhelming last season in big spots that a star should thrive in, but most of this was because he was overwhelmed. The worst-case scenario for Tua, barring injury, is a few more interceptions this season and similar TD and yardage to his sophomore campaign. He played FEWER regular-season snaps than Lawrence and threw for about 30 percent more yards before Heisman voting.

If Tua has improved in his reads against elite defenses, he should have a historically efficient year when it comes to TD/INT rate and completion rate. I think that all of the reports here still lead me to Tua over Trevor at the same price here.

Last season, I had two favorite Heisman bets that were both +2200 before the season started, and my love for them came from their overall situation. Those two QBs were Kyler Murray and Dwayne Haskins, two players with explosive arms in explosive offenses. Clemson and Georgia are the least explosive offenses of the college football elite, but everyone is buying the Lawrence hype because he was the last thing we saw.

Oklahoma and Ohio State are the most explosive offenses in college football with their schemes and coaching staffs right now, and I think that their players are being undervalued in this process. I believe that both coaching staffs have proven that they are going to coach a faster and more explosive offense than most, and I think that the stats are built into the offense.

I prefer Justin Fields over Jalen Hurts at the price of +1000 for both right now due to the things I am hearing/seeing out of both camps. My biggest concern for either guy is BY FAR Jalen Hurts’ overall arm strength, and I have not seen anything to indicate that it shouldn’t be a concern. I just don’t think Hurts can complete as many explosive, downfield passes as Kyler and Baker Mayfield did.

Reports out of Ohio State’s camp are that Justin Fields is “the real deal.” Just two years ago, Fields dominated the high school camp circuit over Lawrence and was in the discussion of best QB in his recruiting class over Lawrence.

Fields told reporters this week that he ran a 4.43 40-yard dash in the spring, something that is completely unheard of from a 6-3, 225-pound QB that can throw the ball downfield like a pocket passer. I expect Fields to be asked to do much more to win games than guys like Tua and Trevor, and I think that Fields actually has more highlight-reel skills than these two.