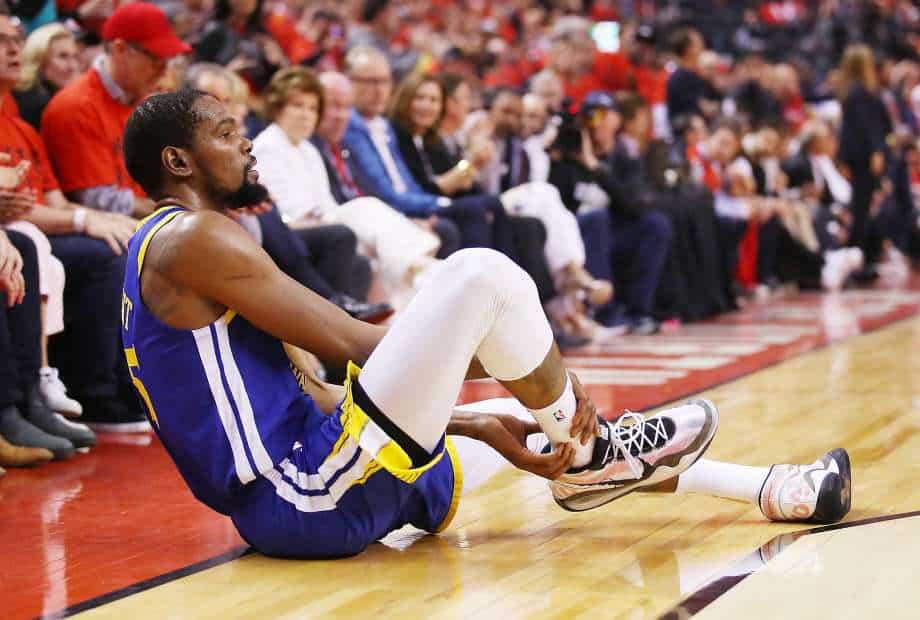 The NBA world was in for a wild ride yesterday. Everything started to happen when Steve Kerr announced at shootaround that Kevin Durant did participate and that he would be a game-time decision for Game 5 of the NBA Finals. Kerr then mentioned that KD would not see a minutes restriction if he did in fact play.

A few hours later, the likes of Chris Haynes and Woj Tweeted that Durant was expected to play, which was eventually confirmed by Kerr in his pre-game presser. This shifted the line drastically towards the Warriors after the opening line was close to -3 in favor of the Raptors. Different books closed anywhere from -1.5 to +1.5 for the Raps, with most of them spiraling away from Toronto. There was even a report last night that the Warriors would be a 9-point favorite at home with a healthy Kevin Durant.

In warmups and at the beginning of the game, Durant looked to be fully healthy, which changed the dynamic of the series until he came up limp in the second quarter and called the training staff out.

The Raptors came storming back to eventually take a six-point lead with just under four minutes left in the game. Steph Curry and Klay Thompson both hit key 3-pointers to tie and take the lead in the game that they eventually hold on to win.
However, we still didn’t quite know the status of Kevin Durant. Now, we know that the Warriors expect to find that KD has a ruptured or torn Achilles tendon in his right leg, which would change the NBA landscape for the next year.

Durant will not return to this series, which is a major hindrance to the Warriors’ chances of winning two more games. Golden State is currently a 3-point home favorite for Game 6, and they would likely be something like a 3- to 5-point dog in Game 7 in Toronto. The Warriors are now around +230 to win the series.

I think that this was obviously a major hit to the Warriors chances, but I do think that they will play incredibly inspired basketball. Durant returned from injury to try and help them overcome a huge obstacle, only to reinjure himself with one of the worst injuries in sports. Those guys in that locker room understand how much that means, and they will not want that injury to prove to be all for nothing.

Obviously, Golden State will need to step up again in Durant’s absence, and that starts with DeMarcus Cousins. Cousins is the third scorer that the Warriors need without KD, but I am not sure that they know how to handle him offensively yet. I really like betting on Cousins’ future production in this series, because that is how the Warriors will try to mask the KD injury.

As for the series prices, I think that they are good numbers. I think that I lean towards Golden State at a nice return, but it’s not something I am jumping at. The other bet to look for is to try and find MVP odds for Steph over +250. Steph has been great in this series, and if the Warriors win, I think that it is almost impossible for anyone but Steph to win Finals MVP.

I am very curious to see how much this changes free agency, if at all. It will definitely change the odds that a few teams end up cutting down the nets next season. Durant has a $31 million player option for next season, which he could accept, but I don’t think that he does that.

Now, does this injury hurt the Warriors’ odds, or does it help them? It most likely helps them because I don’t think that KD will play next season, or I can’t assure you that he will. That leads me to this.

I think the two biggest odds beneficiaries of this are the Bucks and the Lakers because they will not likely have to compete with a Kevin Durant-led team next season. I assume that KD will get a max contract regardless of his injury, but it does hurt the Knicks’, Clippers’, and Nets’ odds because I don’t think he will actually play for them next season.

There is a world where KD stays because he isn’t getting max offers and then tries to rehab so he can play around March or April with the Warriors and prove that he is still Kevin Durant. I don’t think this is likely, but that is another reason to hit the Warriors future for next season. I expect the biggest beneficiaries to be the teams that will not change and will not have to face KD in the near future.