Four Things We Learned from This Year’s Global Gaming Expo 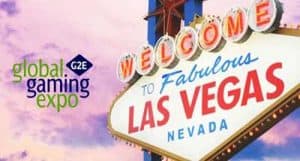 The city of Las Vegas has the honor of hosting the Global Gaming Expo (G2E) on an annual basis. While the crux of this gathering is lectures, panel discussions, and presentations, everyone is more interested in the actual expo part. As various brands showcase their latest inventions and projects, both professionals and regular gaming aficionados can get a glimpse into the future of iGaming as a whole.

This year’s iteration of the event saw brand new slots that were ready for widespread use, but also some exciting concepts and prototypes that have the chance to reshape the industry in a permanent manner. If you missed out on all the fanfare, we got you covered.

1. Social Slots are the Future

Many people in the iGaming industry jokingly call G2E a “slot convention”. Despite the humorous nature of this remark, it’s not that far from the truth. The industry as a whole is moving towards social slots more and more, mostly because they take less space and have the potential to earn the operator small amounts of cash on a very frequent basis.

The theme of this particular G2E event were so-called social slots. Several operators presented slots with reclining bench seats for two or more people. Also, it’s worth noting that illumination is also poised to take a step forward. Aristocrat amazed everyone with a state-of-the-art tunnel installation which results in 180 degrees of lighting, with an additional option to connect to machines in a radius of several feet.

Even though many thought that the highlight of the 2019 G2E was big, in-your-face slot machines, the real winner is Scientific Games. Their innovations and presentations weren’t all that flashy, but they revealed some cutting-edge features, such as:

3. The Comeback of Skill Games

In the mid-2000s, operators from around the world were looking for a way to entice more people into gaming. The solution they came up with was “skill games”, a special form of casino games which the player can affect with their own skills. Despite an initial interest in this innovation, people quickly realized that the house still wins.

While we also saw some interesting VGT prototypes, skill games making a reappearance surprised us the most. Synergy Blue, GameCo and other companies showcase an impressive offer of skill games that are, unlike last time, more suitable for casino environments. There is one other change – “skill-influenced games” is the new moniker for this type of software, as the old term was considered misleading by some.

There was also a notable absence of multiplayer skill-influenced games, which is a good sign for things to come in the near future.

4. People Are Finally Catching Up with In-Play Betting

One of the main topics of the entire G2E event was in-play betting. Despite reaching $10 billion in revenue on a nationwide level, sports betting is still in its infancy in the majority of the country. A big reason for this slow development is the reluctance of gaming manufacturers when it comes to introducing in-play betting.

IGT had a particularly interesting presentation of its landmark product, the CrystalBetting Terminal. Those of you acquainted with horse racing desks will deem it familiar. While it seems similar, it has a couple of distinct features. Players can actually watch any sporting event live, with headphones, and use a moveable window to place a live bet.

IGT stated that this product is being tested at the Pearl River Resort venue in Mississippi, without giving any indication when wider use will actually commence.