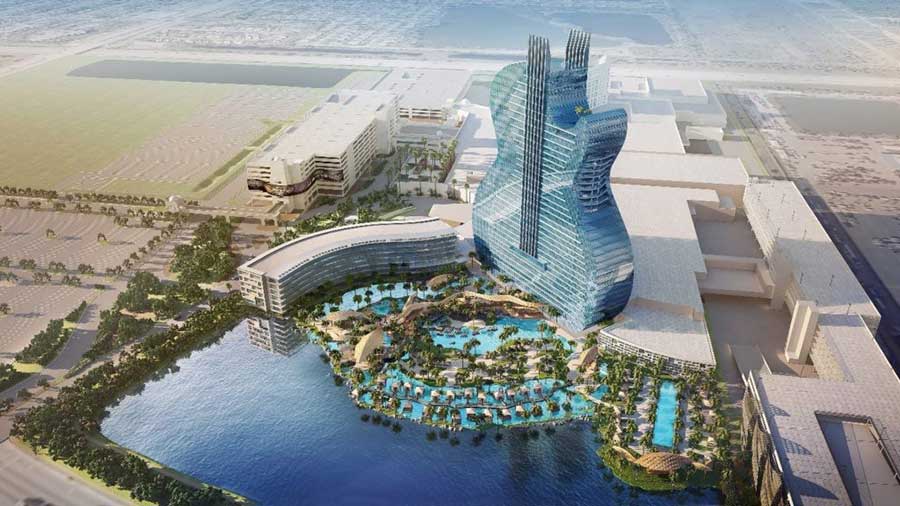 We knew they were going to do this sooner or later, right? Of course, but make no mistake – despite the expectedness of the Seminole Hard Rock Hotel and Casino, there is no reason to discredit any aspect of this truly monumental architectural accomplishment. A plethora of celebrities and potential future guests gathered to witness the opening of the revamped venue in South Florida. On 24 October, three years of incessant work finally came to a more than a satisfactory end.

While the shape of the structure is certainly an eye-catcher, it’s just the tip of the iceberg when it comes to the magnanimousness of this project. After the opening of Hard Rock’s $2.4 billion Tampa venue, people were eagerly awaiting the unveiling of what many believe to be the brand’s landmark project. Free instrument rentals, a private laguna and a cutting-edge audio-visual experience in the atrium and much more await guests in the foreseeable future.

“It’s like Vegas on steroids, man” is what one guest at the event said when asked to describe the whole experience. And who can blame them? The opening ceremony was kicked off by a guitar-smashing event, now somewhat traditional for events organized by Hard Rock. On Friday, guests got to enjoy fireworks and a Maroon 5 concert at the newly renovated Hard Rock Live hall, able to fit 7,000 people.

There was a lot of fanfare in Hollywood, Florida on Thursday too, as many celebrities decided to join the party. Joe Perry, Aerosmith guitarist, didn’t hesitate to express his amazement, as he stated that he saw the beginning of the construction process and couldn’t believe that the whole thing was over in just three years. Joining him were actors, Johnny Depp, and Morgan Freeman, with country star Big Kenny and Khloe Kardashian arriving at some point.

All in all, it was a spectacular opening to an even more spectacular venue. The entire Seminole Hard Rock Hotel and Casino was perhaps more impressive than the festivities, as the public got to experience the interior for the very first time.

After an expansion worth approximately $1.5 billion, there was a lot to be excited about. This project didn’t just change Florida’s skyline forever – it also added 638 suites and rooms and an additional 168 upscale accommodations in the form of the Oasis Tower. This brings the Hard Rock Hotel up to a 1,271-room capacity. There is also a lot to be said about the spectacular Hard Rock Live concert and art hall. It was designed to house 7,000, with motorized curtains able to restrict the space for theatre performance and more “intimate” events. There is also a Couch area, a massive bar, and nine VIP suites.

The guitar-shaped tower didn’t use up any excess space, contrary to popular belief. It was erected in the area where Paradise Shops, an outdoor retail bazaar, once was. Upon entering the Oasis Tower, you will be greeted by Oculus, an awe-inspiring atrium with a unique audio-visual experience in the middle, combining water sounds and animations for a look straight from the 24th century.

Instead of Paradise Shops, the Hard Rock resort now features the Promenade, a 26,000 sq ft shopping area. In addition to this, guests will also be able to enjoy DAER, a complex of nightclubs and dayclubs. People can move freely, as there are more than 150,000 square feet of meeting and walking space. Some of the other highlights include a big new pool and a secluded laguna with butler service, personal cabanas, next to a state-of-the-art fitness and spa center.

Of course, there were also efforts to revamp the casino. It now features almost 200,000 square feet of total gaming space, featuring 45 poker tables, 39 bars, and dining facilities and 3,100 slots.

Hard Rock Int. believe that the guitar hotel won’t attract just gaming enthusiasts, but also a plethora of customers looking for an overall premium experience. Some industry experts have indicated that Hard Rock is considering applying the guitar shape on future venues if this South Florida venue is deemed successful.