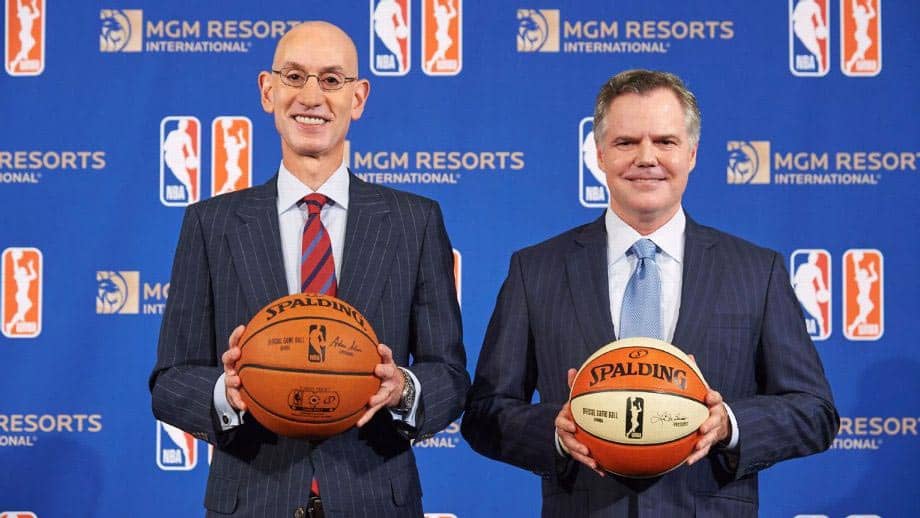 They are slowly and steadily trying to get into the action. Even more brands like NFL are trying to introduce an integrity fee by a state for willing to associate themselves with the sports betting via NFL. Now, these major players are not just trying to take a part of the action, but also prepare their own game rules and players. The leagues have not yet found any interested parties, but attempts are always under process and we can hear some news very soon.

It is said that everything changes, nothing stays the same. With the mindset that the leagues had for online sports betting as a legal way of business seems to be undergoing a change now. Right now, they are not sitting quietly either. They have found other ways of getting into the train through promotional deals and sponsorships. All major leagues are going after this really hard. If you have been paying attention, you can recall more than a dozen such deals between casinos, online partners, sportsbooks operators, leagues and teams. This is another way to jump on the bandwagon. After NJ, and other states following it, the widespread adoption of legalized sports betting is inevitable. To be a paradigm of this shift, the leagues are trying their best to move away from traditional styles.

The gaming scenario, called the iGaming is linked with casinos and live sports together. The coupling of these two parts is the change we are talking about here. Once, the coupling has been given the nod by law firms, there is no stopping customers and wagers online and offline. But, we are sure that online/mobile sports betting across sportsbooks of different states are going to shine even brighter than retail outlets. For example, MGM Resorts have stricken deals with NHL and NBA. FanDuel is also working with NHL. So, you can find a whole list of such league-casino partnerships.

It comes without saying that financial gains are the driving factor of this new change. The new arrangements have brought much income to the leagues. It goes to the players and everyone right from the top. One of the reports about the MGM-NBA deal mentions a figure of about $25 million flowing to the league. Such numbers of the slides of a presentation are itself enticing enough to make the shift. Then, customers want something and it is the duty to deliver it. The market share of these casinos and sports betting giants might grow very rapidly and before a dominant player emerges, the leagues want to stay firm. Let us talk more about some of these deals here.

The NBA deal with MGM Resorts

One of the famous collabs was when NBA, one of the first US sports leagues, joined its hands around sports betting. In July of 2014 things began to change. They started coming around for such betting operators. MGM Resorts were the first casino and the gaming giant to have partnered with NBA. This was also NBA’s first partnership with a US casino for sports betting joint venture. A major professional league like NBA paved the way for other leagues to start counting their steps and build on top of it. In terms of the deal agreements, we are going to find MGM and NBA transparent about their data collections.

MGM shall be using officially the data, branding of NBA at its retail outlets and mobile sportsbook operations. It was reportedly $25 million per annum deal. This is a big thing in the industry as it is considered being in the gold standard in the casino-league agreements till date. So, we are seeing a deeper integration of things as well that is not currently very clear from the terms of the agreement.

FanDuel and the NHL deal

One of the standard agreements were signed between these two giants in sports betting and leagues in the US. They got on track in November. The league/s official partner was FanDuel and the fans were really happy. As a part of the deal, they soon announced an official partnership with the New Jersey Devils. In terms of sports betting partners, this made the team one of the leading partners in the sports betting fraternity of teams and clubs in the US. As part of the agreement, you can now find FanDuel using its branding and name on VIP experiences and league events like the Winter Classic. The All-Star Game also saw a similar treatment. These are strategies to make and create awareness that sports betting firms have been made legal and customers can start wagers on sportsbooks of their favorite teams and games.

And, when Jerry Jones decides that he wishes to make Dallas the first of NFL’s teams to have an official partnership with the casinos, he went and did that anyway. A deal was stricken between the Winstar Casinos to come forward with their sports betting operations. The deal is signed with the Oklahoma facility of Winstar World Casino and Resorts. There are no legal sports betting yet and franchise and licenses are still pending. That is also the main reason why NFL didn’t worry much about the acceptance and signing of the agreements. It is not one of the lucrative deals so to speak at this moment.

The deal between Caesars Entertainment and NFL

There have been multiple of these in the neighborhood and they are all something to learn about. Caesars Entertainment is one of the leading if not the top-notch facility for casinos in the states. Around October, NFL’s Baltimore Ravens and Caesars Entertainment struck a deal together. They were not the only pro sports team that the casino signed a deal with. Frankly, all are converting to more and many teams and partnerships rather than any exclusive opportunities. This makes the impact of the deal weak. On-site promotion is one of the terms of the agreement. The Horseshoe Casino Baltimore is allowed officially to use the branding and names of Baltimore Ravens team. The logos will go on their site, so if you happen to visit the next time in person, do check them out. Allowing for more in-depth control is not the purpose of this partnership. There is a renovation work too in terms of this agreement. The 14Forty bar that is a three-story property at Caesars Casino will be renamed as Baltimore Ravens Bar. This was the second one when it was made though.

Next, we mention the Las Vegas Raiders of NFL. They have too struck a deal with the Caesars. What’s interesting is that the name of the team. If you paid attention, Oakland Raiders is the team which we are talking about. It is going to be rebranded as Las Vegas in 2020. At that point in time, Caesars will be the official partner of the players and branding at their casinos. That was not more than agreeing for a 15-year deal. It was signed early this November itself. The newly constructed Las Vegas Stadium is scheduled to open at around 2020, according to current estimates. This 65,000 seating capacity property will be host to the NFL’s new season when the Raiders will start playing at their home. And, that will mark the beginning of the income for Caesars Entertainment. It is still a far away down the road and we are making comments.

It is a hope that everyone is at the helm. Caesar hopes that its name becomes synonymous with the Raiders down the line. And, indeed this becomes easy. The team-sportsbook/casino partnerships take care of the financial terms of the agreement. In this particular case, this has not been revealed as per our best sources.

Now, being the first to have legalized sports betting and supported by the Supreme Court of USA, New Jersey has its laws straight. Thus, NHL got an opportunity to mark its beginning with a series of partnerships. William Hill now operates a third of the state’s sportsbooks and this is a big thing for the pro sports league NHL. Towards the end of October, the casino giant struck a deal with the New Jersey Devils. What are the terms? Well, this is all good. It marks the beginning of a sports-betting lounge exclusively at William Hill’s Prudential Center. This property in Newark is where the team plays at its home. One of the good things about this is the sportsbook is being built inside the arena itself and gamblers will have access to William Hill’s mobile app that was launched very recently following a slow market.

In this case, experts claim that the most benefit is for the Devils. The financial terms are yet unknown, but probably this is a lucrative deal. The attractive one on our list. Now, William Hill has not just managed to partner with the Devils. There is also the Las Vegas Golden Knights. It is widely known that William Hill is the largest single sportsbook operator in the whole of Nevada. It is also the largest in the entire world. That was the major reason that is found itself signing one of the first deals back in September. NHL and William singed for a sportsbook quite early. This is going to be an attractive deal for both the parties.

The casino is getting full-fledged media, advertising, and promotional rights. You can already find William branding all across the T-Mobile arena at the home games. It also includes William posting league-wide odds for the games. This appears on the Knight-Tron present inside the arena itself. Again, the exact financial terms of the agreement are unknown. But, going by the use of property and transparency, it is going to be quite fair and wide. Surely, we can think of it as one of the most lucrative deals in sports betting partnerships in the US till date.

When everyone is in a hurry

The attractiveness ranking has been made on the basis of deal amount, the payment and the investments. These include the sports, the teams, the players, their depth and breadth of the agreement. When there is a lack of exclusivity between partners it cannot be considered as one of the most lucrative and tempting deals on the casino-league duo. This limits some collabs from appearing in the list. For example, MGM-NHL deal is potentially less lucrative than the MGM-NBA deal for all the right reasons. The immediate benefit always goes to the gamblers in any case. In most of the occasion, this is left entirely to the agreement and the holders and parties.

The terms of contract matters here more. Whenever there is more inclination towards branding at exclusive events and with exclusive partners, the stakes are higher for both. In shortest betting, this is a sure shot success of having the national leagues partnering alongside themselves. What is there to gain for small teams like those of hockey? This is a really difficult thing to tell here is the problem with endorsements is a big-time challenge, for many. Most of the income is from live matches, events, and occasional friendly functions.