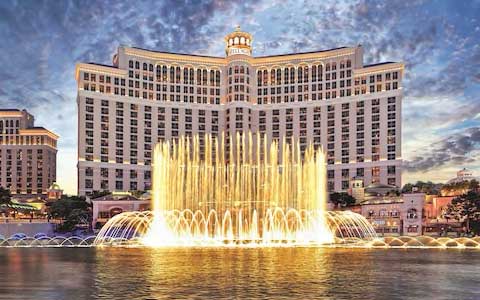 When talking about casino operators that have been showing continuous improvement and advancement, MGM Resorts Int. is perhaps at the forefront of this group. They’ve expanded their influence into sports last year by signing an entering a landmark partnership with the Boston Red Sox of MLB. This, however, was just the beginning. It was also recently revealed that it had made a pitch for an exclusive integrated casino resort in Osaka.

Most doubted the notion that MGM Resorts Int. had enough liquid assets to finance the build, but it didn’t take long for them to devise a solution. A deal was recently struck between Blackstone Group JP, a private equity firm and MGM. With a lease-back arrangement in place, MGM will basically pay rent on a yearly basis until 30. The official transaction will probably take place before the end of this year. As of now, not many details have been revealed.

According to a report by the Las Vegas Review-Journal, there will be next to no changes when it comes to the Bellagio Las Vegas brand and how it’s handled internally. MGM allegedly agreed on a $4.2 billion amount with Blackstone Group LP, with annual lease costs of $245 million.

Not only will they continue to operate the venue, but they will also be given the freedom to oversee any renovations, expansions or similar projects if deemed necessary. Many feared that Blackstone would find another operator, thus impacting the overall quality of the Bellagio experience.

Remaining the casino’s operator was MGM’s priority during negotiations, as Blackstone also deemed keeping one of the industry’s finest a priority for them too. Experts have raved about the deal, mostly because MGM will get an instant injection of $4.2 billion, which they will use for a multitude of purposes.

It’s also an indication that the company will be taking a slightly different direction when it comes to managing their assets.

With the agreement of this Bellagio lease-back deal, MGM has further solidified the notion that they’re up to something. A company spokesman then stated that sales to real estate trusts are their preferred way of reducing debt. Additionally, it has also been confirmed that there will be some administrative changes in the near future, mostly to “redirect capital to more lucrative investments”, as they’ve stated.

Moreover, MGM recently also unloaded their Circus Circus Las Vegas venue to billionaire entrepreneur Phil Ruffin, for approximately $1 billion. This, combined with the impending lease-back sale of the MGM Grand, will be more than enough to finance some of MGM’s overseas projects, such as the one in Osaka.

Additionally, the company will also return capital to shareholders in order to reinforce relationships with old investors, as well as attracting new ones.

The Bellagio – A Historical Venue

The Bellagio Las Vegas has been one of the most popular and most profitable integrated casino resorts in the entire state of Nevada. It was opened in 1998 and is located on a 77-acre plot at the end of the Strip. It consists of a 155,000 sq ft casino space, next to a hotel with 3,900 rooms. Many gaming enthusiasts and Las Vegas natives expressed their concern for one of the city’s landmarks, so MGM listened and made sure that everything stays the same.

Debra DeShong from MGM Resorts Int. has stated both guests and employees are the core of their company, highlighting that their experience must stay unchanged despite the transaction. If you, by any chance, don’t trust them, you would be surprised to find out that MGM has a great track record of running real estate-trust owned properties. The future is indeed bright.

A Match Made in Heaven

Jon Grey, the President and COO of Blackstone Group JP, reiterated that the firm is a big believer in the city of Las Vegas. They’ve already purchased the Cosmopolitan of Las Vegas venue. He also stated that allowing MGM to continue overseeing operators “was a no-brainer” and that they’re more than happy to sign a 30-year deal, with two ten-year extension clauses that have to be agreed upon by both parties.