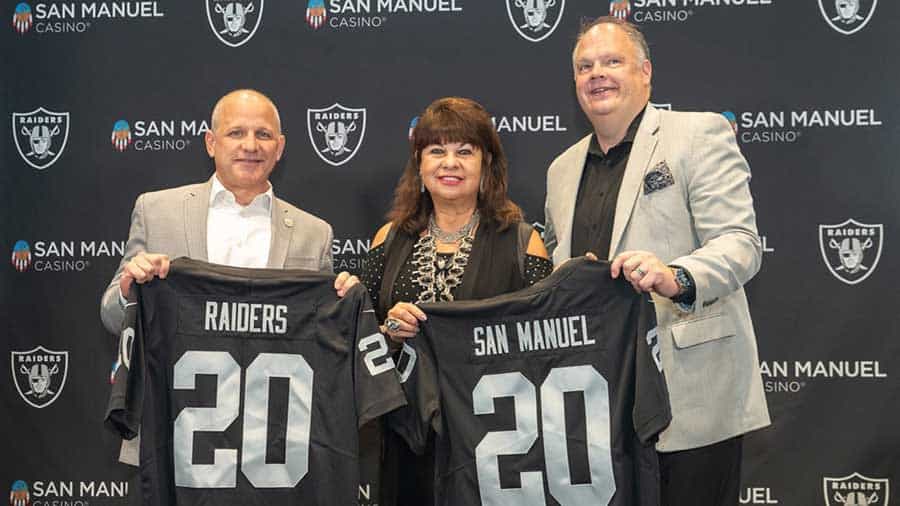 The Oakland Raiders of the National Football League (NFL) are no strangers to moving. After joining the American Football League (AFL) in 1960, they posted great results before having a 12-year stint in Los Angeles, between 1982 and 1994. Since then, they’ve returned to the Bay Area, without much success. Due to the limbo, they’ve been in for the last couple of decades, the Raiders were the perfect candidate for a potential relocation.

In 2017, the league officially approved the team’s proposed move to Las Vegas, which many heralded as an excellent business opportunity for the team, the league, and most importantly – the city. On Monday, it was revealed that the Raiders were making the most out of their relocation by signing a deal with the San Manuel Band of Mission Indians. It’s yet another chapter in the relatively new trend of operators and sports teams joining forces.

According to the Las Vegas Review-Journal, the Oakland Raiders have partnered with the federally-recognized tribe from San Bernardino, California. The San Manuel Band of Mission Indians are the team’s second corporate sponsor and are expected to have their logo on the exterior of Allegiant Stadium. No other details of the deal have been revealed, but insiders believe that it will be signed for a period of ten or more years.

Marc Badain, the Raiders President, and Lynn Valbuean, the San Manuel Band of Mission Indians Chairwoman have made a joint announcement, in which they expressed their jubilation over the completion of the deal. Reports indicate that there were other bidders involved in the process, but that the Californian tribe provided “the most feasible plan of all”.

Badain reiterated his feelings in front of a group of 50 people gathered at the Raiders Preview Center on Monday, stating that the Raiders love the fact that San Manuel has always been invested in helping communities and that the partnership aims to “involve the city as much as possible.” This move also means a lot for both sides going forward.

What Does the Future Hold?

While Allegiant Stadium, the future $1.97 billion venues of the team, is currently being constructed, the Raiders are doing everything they can in order to lessen the financial burdens. In 2018, they acquired the land for the stadium in a bulk purchase worth around $28 million. It was more expensive than they thought, mostly because they had to purchase several surrounding buildings and parking lots in order for the initial plan to be executed.

The team had already signed a 15-year-long deal with Caesars Entertainment Corporation, making the operator a founding partner of the stadium. In turned out that this was just the first domino to fall, as on 5 August 2019, the Raiders also came to an agreement with Allegiant Travel Co. The company won the naming rights to the stadium and will retain them for at least 30 years. In addition to NFL games, the venue will also be home to the UNLV football team, as well as hosting the Pac-12 Football Championship game, starting in 2020.

In the San Manuel Band of Mission Indians, the Raiders are getting a reliable partner. The tribe is also close to opening an exclusive $550 million hotel and casino near Los Angeles. This will be their first onsite hotel, with predictions concerning success mostly leaning on the positive side.

A City That’s Worth It

Everyone doubted Sin City when the Golden Knights of the NHL came to town, but a Stanley Cup Finals appearance in the inaugural season quickly dispelled all of that. After the 2007 NBA All-Star Game, chances of Vegas getting a team in the Big Four leagues were slim. However, the city proved that all the disarray and criminal activity were just an isolated incident. With their NHL experiment going great so far, they are about to get a deserved award.

Sports analysts and experts around the country have voiced their excitement, with some even predicting an NBA team being founded in the city sometime soon. Lucrative partnerships like the one between the Raiders and San Manuel are an excellent display of why Vegas can be the next great sports city in the 2020s and 2030s.