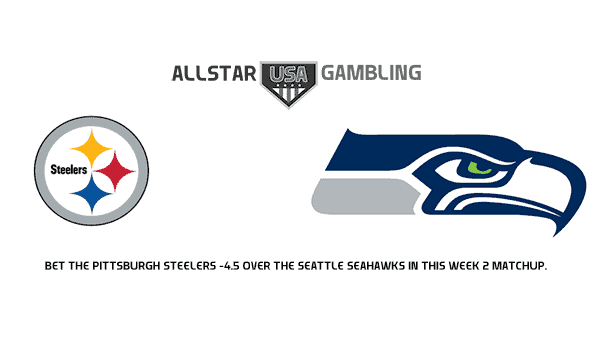 Week 2 of the NFL season is upon us, and there are several great betting opportunities. The Pittsburgh Steelers are hosting the Seattle Seahawks in one of these games on Sunday, and this should be a terrific matchup. Both the Steelers and Seahawks have been in the playoffs for much of the past decade, and there will be plenty of future Hall of Famers on the field in this game.

The Seattle Seahawks struggled or a half in Week 1, but they were able to survive and pick up a much-needed home victory. Seattle was able to rally and knock off the Cincinnati Bengals by a score of 21-20. Pittsburgh struggled in more than just one half on Sunday night, getting blown out by the New England Patriots. The Steelers suffered a 33-3 defeat at the hands of the Patriots and have plenty of questions to answer in this game. Pittsburgh is a -4.5 point favorite over the Seahawks in this game.

Steelers Need to Find Some Offense

The Pittsburgh Steelers failed to reach the end zone in Week 1, and that just simply won’t work. The Steelers are playing without Antonio Brown and Le’Veon Bell this season, and they were a complete mess in Week 1. James Conner had just 21 rushing yards in that loss, and the Steelers had little balance on offense. Quarterback Ben Roethlisberger still threw for 276 passing yards, but he can’t win games on his own.

Pittsburgh was supposed to have a much-improved defense this season, but they didn’t show that in Week 1. The Steelers gave up 341 passing yards to Tom Brady, and the Patriots were able to do whatever they wanted all night. The Seattle Seahawks present some unique challenges to a defense, and the Steelers will likely struggle again.

The Seattle Seahawks found just enough offense to win their season opener, but they know that they have to play better in this game. Running back Chris Carson had just 46 rushing yards in the win, but the Seahawks need him to find more success. Quarterback Russell Wilson threw for 196 yards but did get sacked four times in Week 1. Seattle has plenty of questions to answer in this game.

Seattle is still a terrific defensive team, and they showed that in their Week 1 win. The Seahawks had five sacks against Andy Dalton and the Cincinnati Bengals in Week 1, and they were relentless in the second half. Cornerback Tre Flowers had a team-high ten tackles in the Week 1 victory, and their pass defense was solid all game.

Steelers Bounce Back With Week 2 Win