Allstar Gambling USA / News / The City of Chicago Set for a Third Casino in the Suburbs, As Cook County and the Choctaw Nation Signed a Deal

The City of Chicago Set for a Third Casino in the Suburbs, As Cook County and the Choctaw Nation Signed a Deal 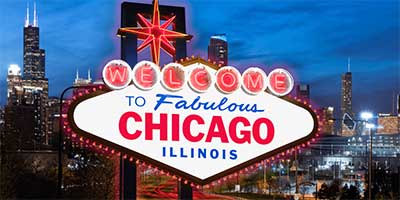 Quite frankly, Illinois might be undergoing the most ambitious gaming renaissance in the history of the modern U.S. The beginnings of this somewhat unexpected revolution can be traced back to a series of bills signed by Governor J.B. Pritzker, whose goal was to create “an influx of new jobs, the likes of which Illinois has never seen before”. First, it was the legalization of sports betting, but the “show” was just beginning.

With ten existing casinos serving as a sizeable foundation, we’re set to see six (or even more) via the handing out of licenses to various operators and federally-recognized tribes. First, the Ho-Chunk Nation of Wisconsin proposed a $380 million venue in Lynwood, followed by the Poarch Band of Creek Indians aiming for a 24-acre property spread amongst the villages of Homewood and East Hazel Creek. Now, a third contender has entered the fold.

As per the Chicago Sun Times newspaper, the Choctaw Nation has inked a deal with Matterson, a village in Cook County, to obtain a license for building a state-of-the-art casino and entertainment venue. According to reports, the tribe presented their plans for a gaming space with over 2,000 positions, as well as a 200-room hotel and a 36,000 square-foot convention center. The building and the operation of the casino will result in several thousands of job openings in the area, both permanent and temporary.

More and more operators are looking to capitalize on the gaming “boom” in the Prairie State, with a special focus on Chicago’s suburban area. Even though experts feared that questionable deals would be signed, the Choctaw Nation is everything but inexperienced. The tribe currently operates a total of seven casinos, mostly concentrated in southeastern Oklahoma. Choctaw Casino Resort Pocola and Choctaw Casino Resort Durant are considered to be their flagship locations in the Sooner state.

Additionally, the tribe has already expressed their desire to focus on working with local, minority-owned businesses to add indoor golf to their venue at some point. A spokesman stated that the Choctaw Nation wants to promote equality and reinvigorate the community.

It has also been uncovered that Cook County officials and the Lynwood board loved the fact that the Choctaw Nation is willing to give 2% of their profits to the community. Not only will day pump some much-needed funds into the village of Lynwood, but they’ve also agreed to renounce an additional 3% of their annual takings, which will be spread amongst a total of 42 cities, towns and villages in the vicinity.

Especially delighted was Sheila Chalmers-Currin, the Mayor of Lynwood. In an interview with the Chicago Tribune, she reinstated her conviction that her village was the best location for a suburban Chicago casino. Also, she pointed out that they want to sign more deals that wouldn’t benefit just Lynwood, but the entire southland area. While confirming that there were multiple casino operators interested in the location, the Choctaw Nation showcased a mix of “financial feasibility, contributions to the community, experience and reliability.”

However, experts believe that future deals will be even more beneficial for the communities, as competition in this area of Illinois will only get stiffer in the 2020s. Most villages and towns are expected to wait and see how will their neighboring communities handle the sudden influx of players, before making a move themselves. The greatest concern is, of course, a potential need for more law enforcement to prevent the sprawl of criminal activity near the casinos.

Hard Rock recently got a license for an exclusive Rockford location, just off the interstate. Deals were also signed between various operators and the cities of Danville, Waukegan and even some more rural areas of Cook County and Williamson County.

State officials believe that the biggest change will be seen in the influx of Illinois natives, as most of them travel to Indiana for gambling. Other states who are pondering similar changes in the gaming legislature will surely observe what’s going on in the Prairie state for the next few years.