Unsure Running Back Situations Could Spell Trouble for Rams and Cowboys 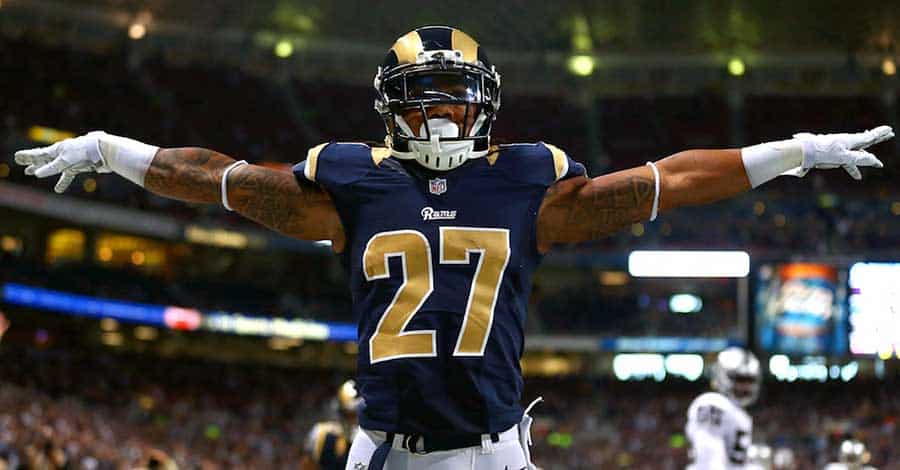 The NFL season is ramping up, and we are starting to see a lot of reports during OTAs that should have us looking to the future for different teams at certain key positions. There are two key happenings with star NFL running backs that are making me think about what could possibly come of the rumblings and how they would affect the team moving forward.

Do you remember at the end of the regular season last year when the Los Angeles Rams’ Todd Gurley didn’t play and then began to be upstaged by CJ Anderson in the playoffs? Yeah, I don’t think this saga is over in the slightest, and I think it will emerge as one of the biggest question marks/debates in the NFL heading into the season.

The Rams traded up to take one of the most explosive backs in college football history in Darrell Henderson in the draft. Henderson, like all running backs, was a pretty polarizing prospect, but he was thrown out as the best back in the class by some people after his incredible season at Memphis.

The Rams have an MVP candidate at running back, with Malcolm Brown and John Kelly backing him up. I think that both Brown and Kelly could be the lead back of the Rams if Gurley were to get injured, so this isn’t a depth move. None of those guys are true scat-backs, not that they can’t catch passes, but they aren’t guys that couldn’t handle being used as a true back.

So why did the Rams trade up to draft a back? I’m not sure, but there is a lot of speculation about Gurley’s health moving forward. Heck, even last season, Gurley and the Rams insisted that he wasn’t injured. If he wasn’t injured, why did he become horrible all of a sudden?

Now reports are coming out about Gurley working closely with the Rams staff to build up his knee, and there was also a report that they have looked into stem-cell treatment if things do not get better. We don’t know if the Rams just don’t know what is really wrong or if they aren’t telling us, but something isn’t right here.

How do we take advantage of this information? Well first of all, if I were playing any fantasy football, Gurley would be undraftable for me, and the backups would be interesting late best-ball fliers.

The other question is, how much does Gurley actually mean to the Rams compared to Malcolm Brown or Henderson? If you think that the answer is a lot, I would bet the under on the Rams’ team total, which is currently at 10.5. If you don’t think that is the route to go, my favorite option would be sprinkling bets on Henderson at things like +3000 for OROY.

If Gurley is done, Henderson would be in an elite offense competing against career backups, so he would instantly jump to the top four guys on the board, in my opinion.

The other story in the news is an incident where Dallas running back Ezekiel Elliott was handcuffed at a concert. There are reports that the NFL is investigating this situation, which could spell trouble for the Cowboys yet again. There is not a ton of evidence out there, and I don’t think there is much hidden either.

Elliott was captured on video shoving down a man and then got apprehended. I would be surprised if there was a big issue with this, and if I were picking a side, I would expect this to get resolved with no external punishment. However, the NFL has not been kind to Elliott in the past, and the NFL doesn’t have to be fair in its investigations, especially if they view someone as a troublemaker in the first place.

The Cowboys will have two new faces in the backfield after drafting Tony Pollard and Mike Weber to backup Zeke. I think that Weber is more talented than his draft position indicates, but he has dealt with injuries and is currently dealing with a knee injury that he suffered in the offseason.

Maybe that gives Pollard a leg up, but I’m not sure that they see Pollard as a three-down back. Pollard played behind Darrell Henderson at Memphis and was used as a pass-catching back that could run the ball when needed.

Pollard isn’t a small guy, but he has not ever been used as a true RB, which may be telling and it may not be. There is a situation where the Cowboys have a suspended Zeke, a pass-catching back that can’t handle more than 10-12 rushes a game and an injury-prone backup.

In the betting market, I would likely avoid betting anything to do with the Cowboys until future notice. I think that Zeke is one of the most dynamic backs in football when it comes to how much he impacts his team, and I would try to hit the under if we saw him suspended or ever injured. Behind Zeke, there are tons of questions and no answers, and the Cowboys backfield would likely look lost if they lost Zeke.