Jumbo Joker is a fun Betsoft game with two levels of reels, bottom one serving to grant you entry to the top one, where all the best prizes are, including a potential 2000 coins prize for landing three Jokers! The game was released in October 2017. 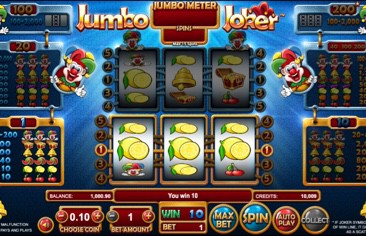 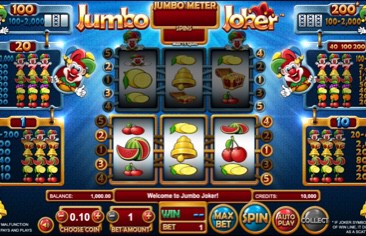 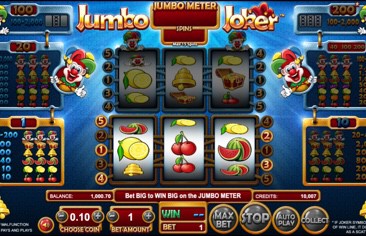 There are two reel sets in Jumbo Joker, and you use one to earn entry to the other. Both reel sets have three reels and five paylines, and the bottom one has six symbols while the top one has eight. Whenever you land a win of 20 coins or more on the bottom reel, you’re granted entry to the top reel and can use your coins there, and will want to do so as the prices are significantly higher on the top reel.

The bottom reel has six symbols. Cherry and Lemon are the two lowest-paying symbols and three-of-a-kind win involving these won’t be enough to get you to the top reel if you’re playing for 1 coin as you’ll get 10 – not enough. Watermelon will get you 40 coins, Bell 100, Chest 200, and Joker will bring you anything between 10 and 200 coins. Prizes are different if you play for 10 coins, and you’ll get entry to the top reel for any three-of-a-kind win, but the prizes for Bell and Watermelon will be only doubled and not 10x.

On the top reel you’ll also have a similar choice, as paytables are different for 20 and for 40 coins, but this time it’s a no-brainer, the prizes for 40 coins are more than doubled compared to 20 coin prizes, except that the jackpot is the same. In either case, you’ll win 100 to 2000 coins for three Jokers. 7, Bell, Watermelon, Grapes, Lemon, Orange, and Cherry complete the set of symbols.

This is a standard game with two levels of reels, with the prizes being much better on the top reel. It’s your job to reach the top reel as often as possible, as that’s when you’ll get a shot at a real prize. The bottom reel only serves to get you to that top one. The theoretical return to player (RTP) of this Betsoft slot game is only 95%, and the payout is split unevenly between the two reels. The bottom one has very low RTP, and the top one is where you get a very generous game. The variance of this slot is very high as not only you have to get a win on the bottom reel, but you have to be lucky enough to get a good win on the top reel while you’re there.

There’s an audience for this type of slots, and getting to the top reel to win a Joker Jackpot is definitely an intriguing proposition. The game does involve a level of strategy regarding bet size, and it’s one for a thinker. Not a bad title by Betsoft, though the theoretical payout is a bit too low.