Psychedelic Sixties is a fun Rival Gaming slot that features all the most popular symbols from the 60s and gives you three Scatters that trigger free spins, a bonus round, and jackpot win! Enjoy the era of free love and play a slot game that can pay in many different ways! 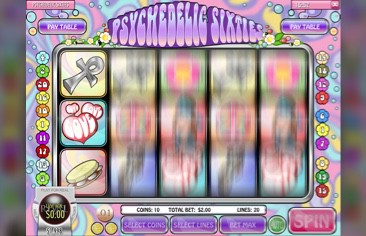 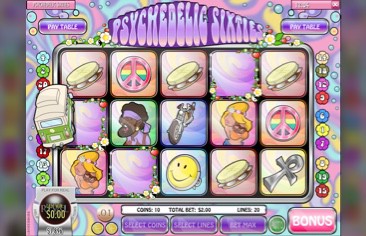 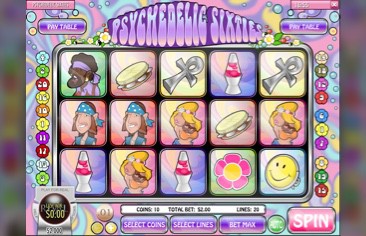 A general review of the Psychedelic Sixties Slot

Psychedelic Sixties slot is played on a standard 3×5 board with 20 paylines, and you may choose how many paylines do you wish to play 1-20. The game uses eight regular paying symbols, seven of which belong roughly in the same group when it comes to payout as the difference between the best and the worst of these seven symbols is only 6x, 50 coins to 300 coins. And then comes the best-paying regular symbol in the game that pays 1500 coins for five-of-a-kind, and it’s the Jimi Hendrix lookalike. This is also the only symbol that pays already for two-of-a-kind. All the symbols have nice artwork that captures the spirit of the 60s by using the symbols of the era such as peace sign and a lava lamp.

Wild Love is the Wild symbol and it appears only on reels 1, 2 and 3. Wins are multiplied by the number of Wilds, so if you get three you’ll see a win multiplier of 3x. Motorcycle Scatter triggers the free spins, and you’ll get 10 free spins with a 5x win multiplier if you land three of these on your reels. Three VW Van Scatters trigger the bonus round, and the Jackpot Scatter is the best-paying symbol in the game as you’ll get 2000 coins for five-of-a-kind.

Psychedelic Sixties has a theoretical return to player (RTP) of 95.00%, so the game playing experience is essentially similar to classic slots, where you won’t get a quality payout but will get a certain chance of winning some money if you trigger the bonus features often enough. And there are plenty of these in Psychedelic Sixties, as you got three Scatters and a Jackpot Scatter. The outcome of your playing session will depend on how lucky you are with landing these Scatters.

Variance seems to be medium, perhaps a bit high as the game does have the potential to issue a big win on any spin, the maximum here being 2000 coins in case of that Jackpot Scatter or 1500 coins in case of the best-paying regular symbol. Wilds can also help with their multiplier, and so can the free spins game where you’ll have a 5x win multiplier throughout your 10 free spins. Therefore, Psychedelic Sixties can pay, even if the theoretical payout is not high.

It might be necessary to play a longer session in order to get all the wins this slot game offers, though you never know, you might get the best possible win on one of your first spins. This is among the better Rival Gaming slots.