As the Reels Turn Slots Review

As the Reels Turn is a mafia-themed slot game by Rival Gaming that has a story that unfolds as you play the game, and you discover what’s going on in and behind the scenes of El Paradiso casino. The game features seven scenes which you must discover, four Scatters, and two Jackpot symbols! 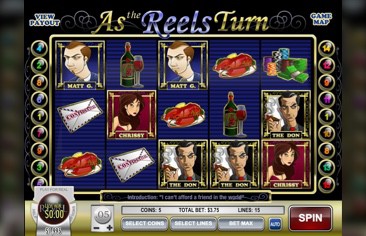 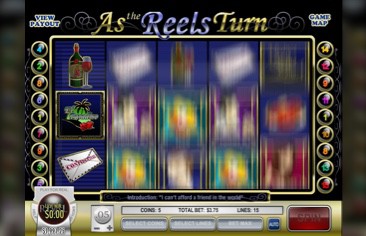 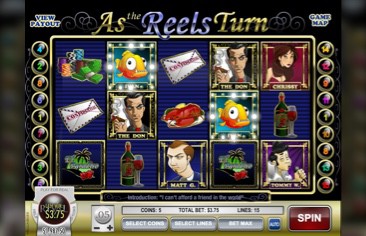 A general review of As the Reels Turn

As the Reels Turn is a 3×5 slot game with 15 paylines and a total of 8 normal symbols and 4 Scatters, and as you play the game you’ll advance through the story.

You’ll advance to the next round of gameplay and the next scene when you land three As the Reels Turn Scatters on your reels. There are a total of seven scenes, and you’ll get a total of three obligatory bonus rounds as you advance through the scenes. You can track your progress anytime by clicking the Game Map.

Three or more Tommy symbols trigger the Tommy Wong Feature Act Bonus Round. It’s a simple pick a prize type of bonus game, where you’ll get to choose which act will Tommy choose for tonight among four acts, and you’ll get a coin prize.

Other than the four Scatters, there are eight more symbols in the game. Two are called Jackpot symbols and are actually high-win symbols which you must align on a winning pay line in order to get paid, and the remaining six symbols are divided into two groups. The medium-win symbols – The Don, Matt, and Chrissy – all pay the same, a decent amount, and the low-win symbols all pay the same and are insignificant.

As the Reels Turn – Strategy and Tips to win

It is essential to keep the sound on for this game, as only then you’ll be able to enjoy the story as the characters talk to each other. Each scene has its own theoretical return to player (RTP) percentage, and since this is a Rival Gaming slot it is expected that in its entirety, the game has around 95% RTP, perhaps a bit better. Since this is a slot with in-game progress, it allows for different bets depending on where you are in the game, and how close do you think you are to triggering that Bonus Round which gives you a coin win. In scenes that don’t trigger a Bonus Round when you go from one to another, which is scene 3 to 4 and scene 5 to 6, it makes sense to bet less.

The game is enjoyable and it can keep you spinning for a while as you advance through the story, and it’s a decent choice of a slot game with decent RTP. The Scatters and the Bonus Rounds add a lot to this game, and the free spins game with 3x win multiplier can be quite rewarding as well.