Blood Eternal is a vampire themed slot released in September 2017, and it’s a quality title that adds a lot to the genre. It’s possible to get twelve-of-a-kind Bat wins worth 10,000 coins, and the free spins game starts when Humans and Vampires meet on your reels! You’ll get sticky Wilds and additional Wilds during the feature. 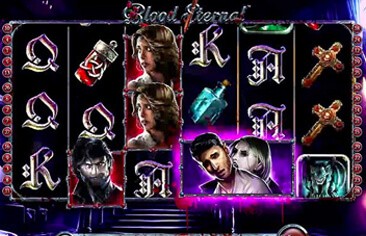 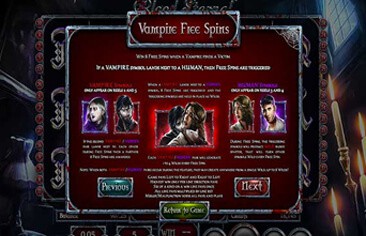 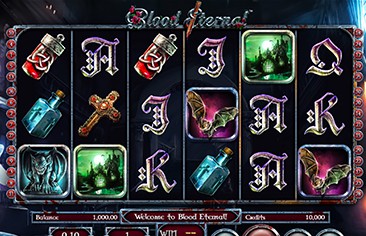 A general review of Blood Eternal by Betsoft

Blood Eternal, played on 3×6 board with 30 paylines that pay both ways, may seem like a clone of Immortal Romance or Blood Suckers, but only at first glance. It’s actually a quality stand-alone game that has its own advantages, even if it’s not as elaborate and immersive as the most widely known vampire title.

The main feature of Blood Eternal is innovative. The free spins are triggered if a Vampire symbol lands next to a Human on the reels. Vampires appear on reels 2 and 5 only, and Humans appear on reels 3 and 4 only. When the two land next to each other, you’ll get 8 free spins, and the triggering symbols will be held as Wild for the duration of the feature. If the second Vampire/Human pair lands next to the existing pair, you’ll get 8 more free spins. Extra Wilds, up to 8, may also be produced during the free spins game, making it potentially very rewarding if you’re in luck.

There is a Bat symbol and a Bat 2x symbol. The maximum number of symbols on a pay line is 6, but every Bat 2x counts twice, so it’s possible to have a twelve-of-a-kind win with Bat symbols, and this will pay whopping 10,000 coins. Wilds substitute for all symbols, including Bats, and in that case, the Wild will substitute for a single Bat.

The Betsoft game uses five high-value symbols, three of which are really worth something while the remaining two are actually medium-paying symbols. There are also four card symbols, for a total of nine in the game, which is really insignificant. The paytable alone isn’t enough to generate significant wins, but Blood Eternal pays both ways so wins are twice as common.

Strategy and Tips to win at this slot game

The theoretical return to player (RTP) is 95.03%, which isn’t enough to treat this game seriously when it comes to making money, though it does have the potential of issuing a really big win if you’re lucky and catch the game at the right moment. This is a slot game for classic slot players, as it offers a relatively good win potential in exchange for a lower overall payout percentage.

The bonus features make all the difference in this game, and Bat wins are considered as a bonus feature even if they do appear in the base game. All in all, this is a good slot game with fun features and should be played by fans of the genre, and classic slot players in particular. It’s a worthy addition to the vampire genre.