The popularity of Blackjack Tournaments in the usa

The top two players as per the value of accumulated chips will progress to the subsequent round, which is usually the semifinal. The second round or semifinal usually begins with a fresh stack of chips. This could be anywhere from five hundred to a thousand dollars. Only the top player with most chips or the highest value will progress to the final round.

Online blackjack tournaments are a little more thrilling than the usual version of the game. You do not have to consistently win against the dealer to emerge victoriously. All you must do is win against the other players. Those who have larger stacks of chips often root for the dealer as that simplifies their path forward. The final round or table typically has six players. All six players would win something at least in the end. The winner gets half of the payoff. The runner-up gets a quarter of the payoff. The player coming in at the third place gets fifteen percent of the payoff and the other three players taking the fourth, fifth and sixth places respectively get five percent each.

Where to Play Blackjack Tournaments?

You can play a blackjack tournament at land casinos or online casinos. Not all online casinos run a live blackjack casino so you should shortlist your options accordingly. Online blackjack tournaments usually have buy-ins pegged at forty dollars and players are permitted to go for two re-buys, usually twenty dollars each. The payoff or the prize money can be anywhere from a few thousand to a million dollars, at times more. Always read all the rules about specific blackjack tournaments. It is not just about buy-ins or re-buys but the entire process in which the tournament would be conducted. We recommend checking one of the casinos from the table above regularly for ongoing promotions and tournaments. 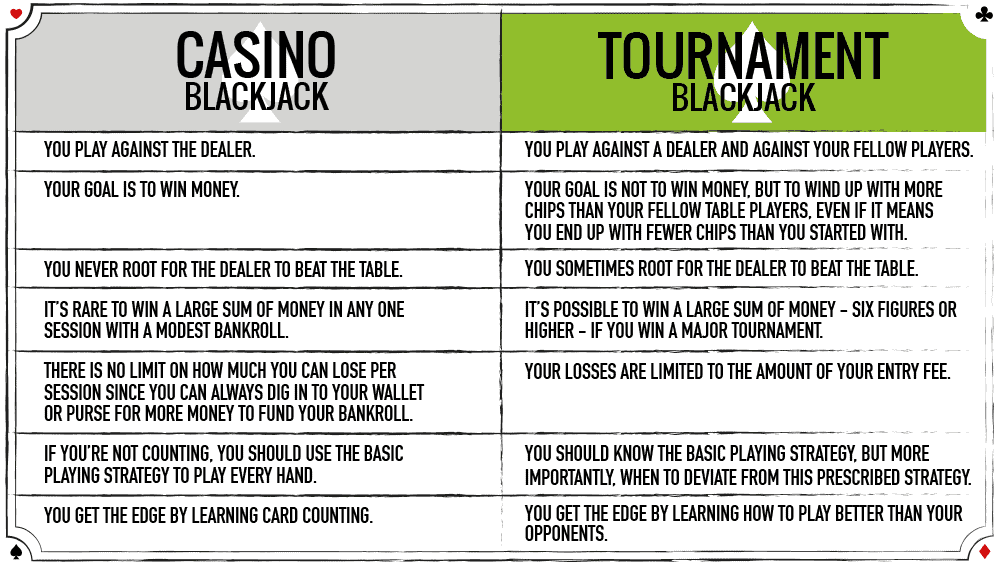 Elimination blackjack tournaments are more popular. All players get to play the same number of hands before the end of the round when the player with the least chips gets eliminated. One does not have to be completely out of chips at this stage but only with the smallest stack.

Mini tournaments have a low entry fee and the prize money is not a lot. Such tournaments are organized every now and then, often once a week or more at land-based and online casinos. These tournaments are very popular among regulars who do not wish to risk a lot every time they want to have some fun and are best for amateurs or novices. Only after getting familiar with these should one proceed to major tournaments where entry fees are high and the rewards are much greater.

Major tournaments can have payoffs worth a million or more. These are not organized every week but on select weekends of the year. Sit ‘n’ go blackjack tournaments are usually organized online. They are available all the time. The maximum number of players at any table is six.

How to play a Blackjack Tournament

You must decide if you want to play at a land-based casino or participate in one of the online blackjack tournaments.

There are a traditional blackjack tournament strategy and a contrarian approach. The more common strategy is to always match the bets of others as a way to let them know that you are in the game and not down or out. Every bet you place should also be in accordance with the stack of chips you have. Disproportional betting would lead to losses. You cannot be passive when you have few chips left. Those with more chips do not need to be aggressive.

The contrarian strategy is to bet against the tide. You should go for a smaller bet when you should practically go for a higher bet. This is primarily to facilitate carving out a distinct route ahead rather than just following or responding to what other players are doing. Amateurs or novices will have problems with such a strategy.

To enhance your chances of winning online blackjack tournaments, you must hone your skills and always be lucidly familiar with the rules. You cannot have problems recollecting the rules when you have to place bets. You must know the game well and be confident in your assessments. Never forget that small wins matter as much as big wins. It is actually several small wins that will help you to chart smooth sailing than hoping for that one elusive big win. You need more chips than your competitors. Always prioritize a short-term strategy for the round. You can think about the next round when you qualify.

Never make a mistake and do not ever miss a mistake made by others. Avoid chatting and any type of distraction. It would hurt you immediately. Have your own strategy and do not engage in any flip-flop during the play. If you are uncertain of your ideal response, then your competitors will spot that and you would be vulnerable to making the wrong moves. Start with mini tournaments and then sign up for a major one.

11 Mistakes that keep you losing at Blackjack
Top 6 Blackjack Variations You Need to Play
Is Blackjack card counting really worth the effort?