Even if you happen to be a passionate player of online casino games, there may be fun gaming options you’re still not aware of – such as social casinos. As an alternative to playing at online casinos, social casino sites enable fans to play social slots and a range of table games for free via social networks and mobile apps. True, there’s no money to be won, but there are many other reasons why millions of players opt for this particular kind of online gaming experience – the main ones being that it’s fun, relaxing and enables social interaction. The market is booming and you may want to check why.

What is Social Gaming?

Essentially, social gaming is gaming done via social networks. It probably won’t surprise you to learn that the most popular social media for online gaming is Facebook (over 60% of social gamers), followed by Google+ (just under 20%). The benefit vs using the free-play option at an online casino is that playing via Facebook enables you to invite friends, start playing with them in next to no time and compare results. If you choose to play by yourself, the social network allows you to brag about a particularly nice win. You’ll also be able to post-awards, trophies, and achievements for the whole world to see. Owing to the viral nature of social networks, (good) games are advertised by players and thus save developers the time and money needed to spread the word and attract new users via various forms of paid advertising.

The choice of social games is continuously increasing, with many of those offered via Facebook created by independent developers and unavailable anywhere else. Launching a social game is even easier than doing so at an online casino. If playing on Facebook, you’ll be asked which details you’re willing to share, accept or decline an offer to purchase extra benefits, and choose the game you want to play – that’s all! Though most social gaming apps are free, the industry still manages to generate about $3 billion by selling in-game benefits, upgrades and virtual goods.

One word of warning, though. Unlike online casinos that are regulated by licensing organizations and have strict rules to follow, operators of social casinos can do pretty much what they want. They may, for example, treat you to an amazing winning streak which will have you believe you could make millions if you were to play with real money in an online casino USA. Then, having switched the (free) social environment with that of an online casino, you end up losing large amounts of real cash.

The bottom line is that success at social casino games is in no way an indicator of your potential performance in a casino, virtual or physical one, and should not influence your decision to play for real.

Slotomania is one of the social casinos operated by Playtika, a company that was founded in 2010 and a year later acquired by Caesar´ Interactive Entertainment. It was one of the first providers of free social games available to play on social networks and, shortly after, also mobile platforms. Following a few acquisitions of its own (Bingo Blitz, WSOP Social, House of Fun), the company was once again bought – this time by a private equity consortium led by Giant Interactive. Nowadays, Slotomania boasts over 5 million users and about 12 million followers on Facebook. Facebook SuperGroup, operated independently by Slotomania players, allows them to share their wins and questions with other Slotomania fans as well as get technical support. The mobile app is available on virtually all platforms, including iOS, Android, Windows, and Amazon. 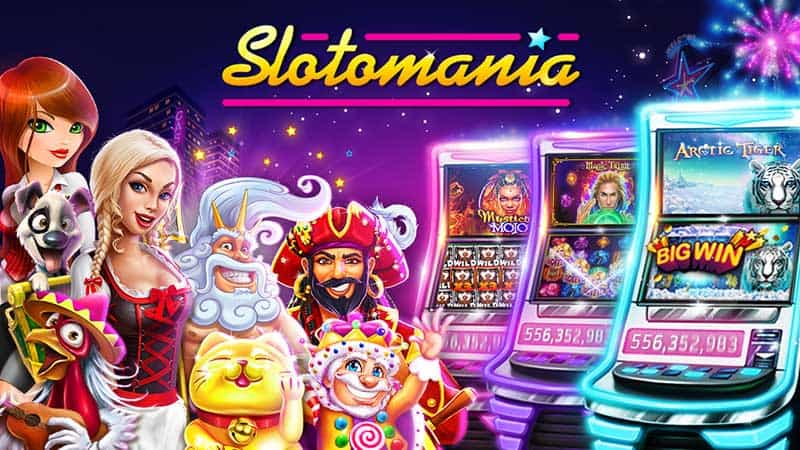 The social casinos gaming catalog consists of about 160 classic and social slots. Coins are needed in order to play and they can be collected for free in many different ways or purchased. As soon as you sign up, you’ll receive the initial batch of 10,000 or 20,000 coins to unlock and play the first slot machine in the game. 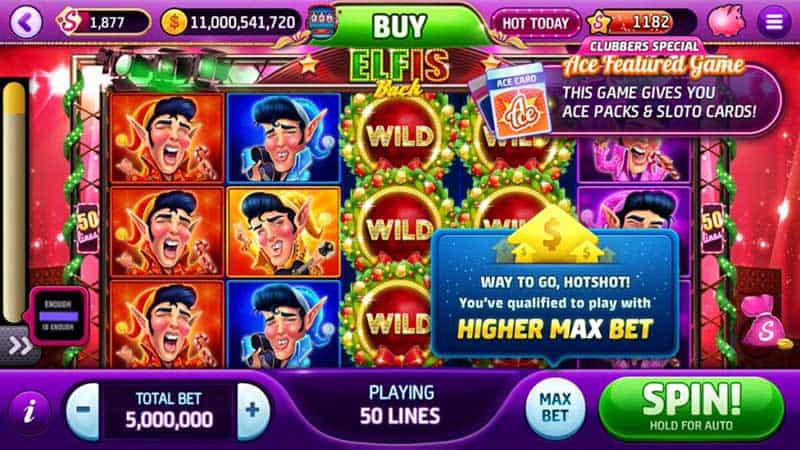 SlotoCards is one of the many available features, offering users to collect cards by playing games, receiving gifts from friends, progressing to higher levels and making purchases. SlotoQuest sends players on a mission trail on different slots, rewarding them with bonuses and prizes for completing different missions. SlotoClub gives you access to the newest games, linked-Jackpot-slots, daily cash backs and more. Boosters are game enhancers (mostly bought but sometimes also given for free. Piggy Bank gets filled with coins every time you spin one of Slotomania social slots.

Players can additionally send coin gifts to their Facebook friends, participate in Tournamania – live competitions between Slotomania players, as well as get SupeRaffles ticket with any in-game purchase and enter the raffle for a chance to win 1,000,000,000,000 coins.

Zynga is one of the leading developers of social games played by millions every single day. This is the company that has launched super-popular FarmVille and features an exceptionally diverse portfolio which includes slots, backgammon, chess, racing, crosswords, rummy, solitaire, and many others. Fans of casino games will surely enjoy Hit It Rich! and Wizard of Oz slots, as well as Zynga Poker. 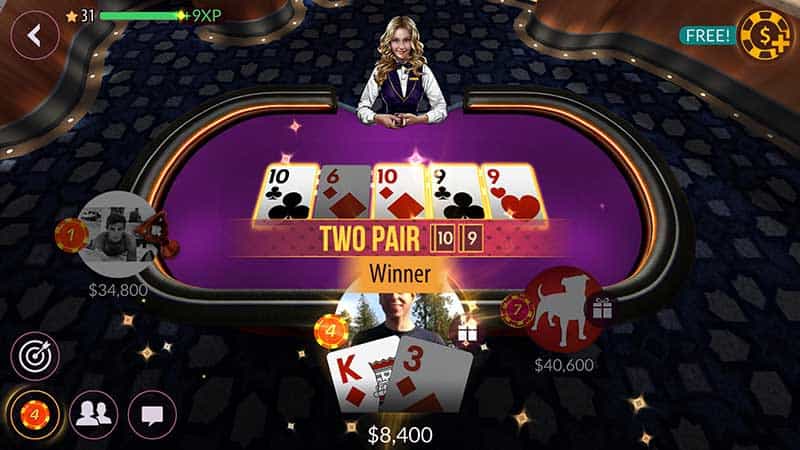 Texas Hold ‘Em Poker can be played on Facebook as well as iOS and Android mobile devices. Facebook page currently has more than 60 million followers. Having joined, you’ll receive 60,000 chips on the house and get a seat at a table with up to four other players. The game plays very fast and is hugely exciting; you’ll find yourself glued to the screen in no time. 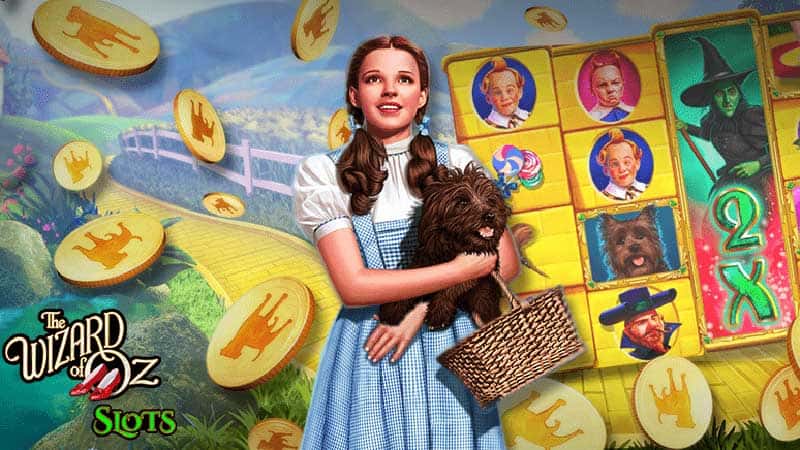 Players at social casinos can tip the virtual dealer, choose Poker Buddies among their Facebook friends and invite them to play along. There will be multiple challenges to participate in, and once you reach level 4, you’ll get to compete in Leagues and earn tempting prizes each week. Zynga has a multi-tiered VIP program which provides benefits such as exclusive chip packages and special game modes. Sit-N-Go tournaments offer an opportunity to win more chips and earn trophies.

DoubleDown Casino is a flagship product of DoubleDown Interactive, a company that was acquired by IGT in 2012 (4 years after it was launched) and in 2017 sold to DoubleU Games Co, a global social casino operator headquartered in South Korea. Players can access a variety of casino games via Facebook and downloadable apps for iOS and Android devices. 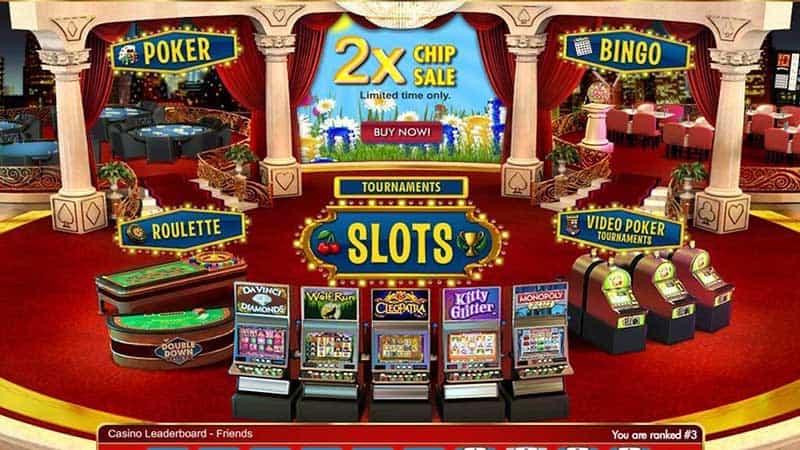 The social casinos Facebook page has over 7 million followers. At the very beginning, you’ll get whooping 1 million free casino chips to play with. Having arrived at a virtual casino floor, you can choose to play slots, poker, roulette, blackjack, video poker or bingo. To gain access to High Limit Room which offers treats such as 2x jackpot wins, early access to new slots and higher max bets, you’ll need to buy a Booster or play slots 3 days in a row. One of the benefits of playing at DoubleDown Casino is that one gets to spin the reels of popular IGT titles such as Da Vinci Diamonds, Wheel Of Fortune, Pixies Of The Forest, Siberian Storm, and many more. 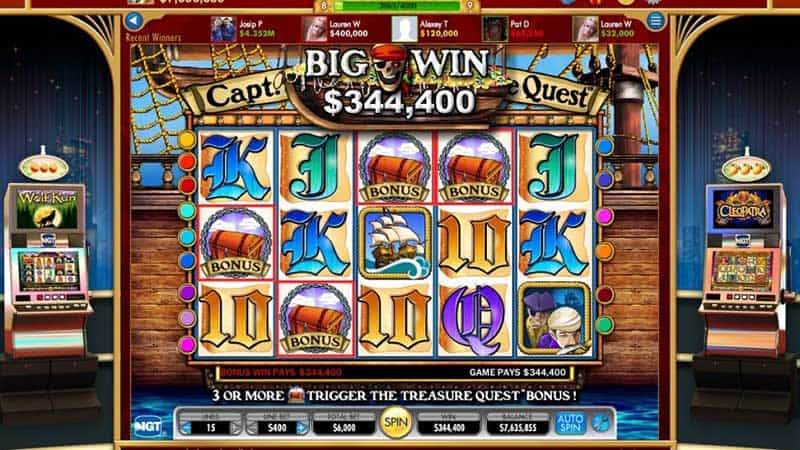 Like all social casinos, Big Fish Casino is accessible via Facebook and apps downloadable from the App Store, Google Play and Amazon. Its portfolio consists of social slots, roulette, blackjack, Texas Hold’Em Poker, and a range of other games. Players can win up to 100,000 free chips just for logging in and claim a portion of 16 billion chips given out in jackpots on a daily basis. More chips can be won by teaming up and competing in events; the player can create their own club or join an existing one. You can also join tournaments and play with or against your friends. VIP status provides access to premium slots and tournaments and you’ll get to brag about it using an exclusive profile badge. 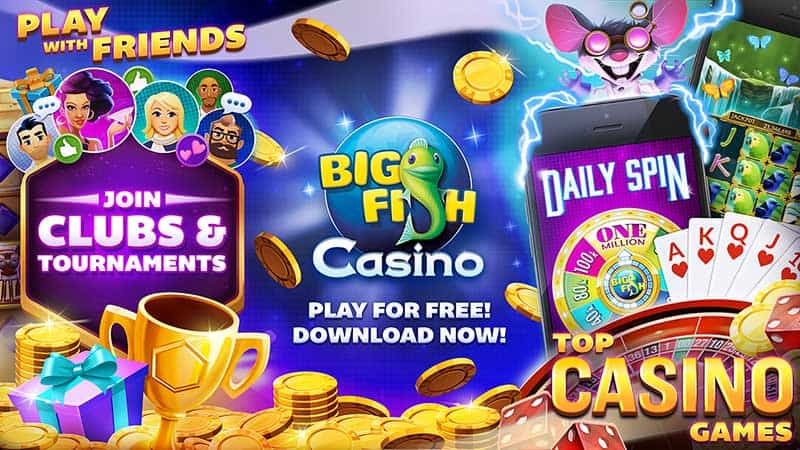 Big Fish has over 800,000 followers on Facebook. Having started the game, you’ll see a lobby which provides access to social slots, roulette, blackjack, Texas Hold’Em Poker and Burn 3 Poker. The menu on the bottom offers players to shop for coins and gold bars at discounted prices, join one of many clubs, and add friends. New members will get to spin the reels of Jackpot City Deluxe slot to start with and can look forward to 65 other titles successively unlocked as they keep playing. 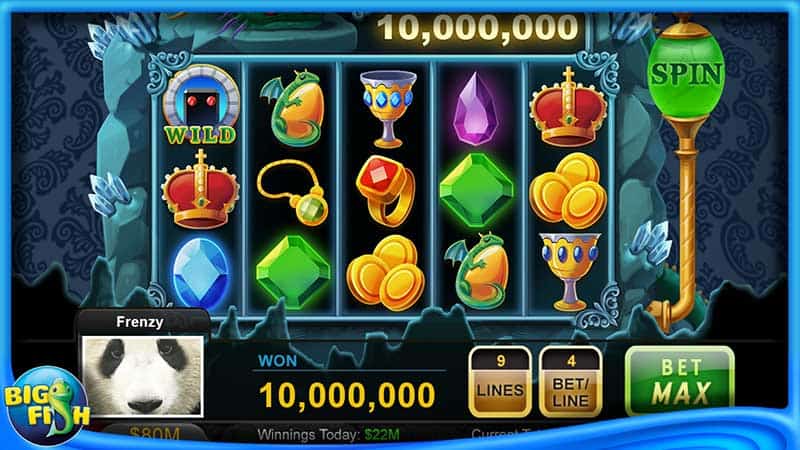 There are additionally 6 roulette, 6 blackjack and 6 Texas Hold’Em tables with different limits. If you opt for Burn 3 Poker, you’ll be playing against a single opponent and prompted to put cards in columns to create 3 card poker hands. The player with the best hand wins the column, and the one with most columns wins the game.