Bust a Vault is a simple three-reel slot machine by Rival Gaming, and it offers players a single pay line on which they must align one of seven symbols in order to land a win. The game is not a bad choice for fans of the genre, though other players will likely stay away. 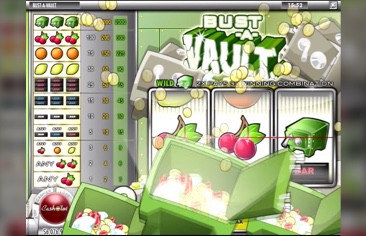 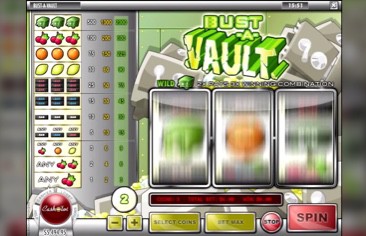 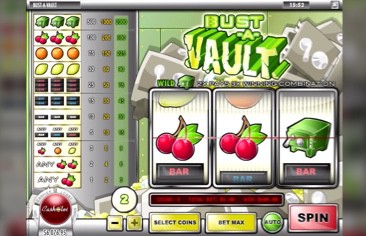 The game uses three reels with nine positions for symbols, and all the usual fruit machine symbols are here. Cherry is the lowest-paying symbol and you’ll get 1 coin – or your stake back – whenever you land one Cherry anywhere on your reels. Two will pay 2 coins, and you’ll get 3 coins for any combination of Cherry, Orange, and Lemon.

There are three variations of the Bar symbol, White, Blue and Red, and they pay from 5 to 25 coins depending on which ones did form your winning payline. Red Bar is the most valuable, and it pays five times better than a combination of the three Bars. Lemon pays 30 coins and that’s the last medium-paying symbol in the game, with three more high-win symbols. Orange pays 75 coins, Cherry pays 100, and the Vault pays 500 coins for three-of-a-kind. Vault is Wild and substitutes for all other symbols, and it also pays if you get two of them on your payline, you’ll get 3 coins.

There is only one pay line here, and so the only way to land three-of-a-kind is to align them on the central part of each reel. There are symbols around the central part but they don’t amount to anything. Also, it’s possible to get a blank symbol. With this in mind, it’s clear this is a high variance slot, as one would expect from a three-reel fruit machine, but the variance here borders with extreme. It’s very rare to get a three-of-a-kind win, let alone three Vaults.

Strategy and Tips to win at Bust a Vault

There’s little to do in Bust a Vault other than spin the three reels and hope for the best. Some betting strategy might be useful as it might lead to a bigger win down the line, and in any case, playing Bust a Vault is something that demands a longer playing session. It will be a while before you see a significant win in this Rival slot game, and even when you do, it won’t be life-changing. It’s a decent fruit machine for fans of the genre. The theoretical return to player (RTP) is only 94.84%, which means that playing this game is likely a losing proposition as the casino edge is just too high to justify this kind of variance.

There’s little to attract you to Bust a Vault unless you’ve played this kind of slots before and know exactly what you’re looking for.