Sherwood Forest Fortunes is one of the most fun Rival Gaming slots. You’ll assume the role of Robin Hood and will travel through the Sherwood Forest to finally meet the Sheriff of Nottingham and fight him in his castle! The game has a Jackpot Scatter which awards 10,000 coins if you land five of them. 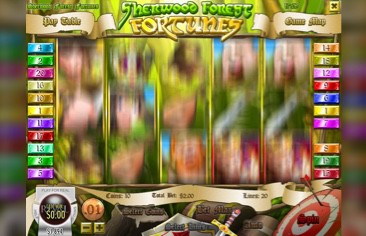 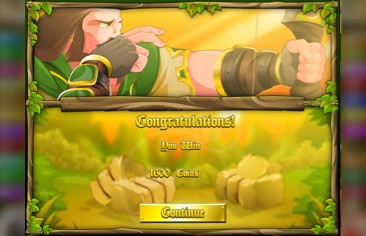 Sherwood Forest Fortunes is a 3×5 slot game with 20 paylines that takes you through three different in-game locations. First you will cross the bridge to enter the Sherwood Forest, then you’ll visit the local village and finally, you’ll battle the Sheriff of Nottingham in his castle. As you progress through the game and move between locations, you’ll be given fun and rewarding bonus rounds to play. You advance through the game by triggering the bonus round, and for that, you need to land three Quiver Scatters on your reels.

There’s also a free spins round which you trigger by landing three or more Lady Marian Scatters on your reels. You’ll get 5, 10 or 25 spins with a 3x multiplier for three, four or five Scatters respectively. In case of less than five Scatters the free spins game likely won’t be too rewarding, it just serves a purpose of giving you some spins that are free and perhaps awarding you with some cash to keep you going. But not every time.

Sheriff of Nottingham is a Jackpot Scatter, and it pays 10 coins if you land two of them on your reels, all the way up to whopping 10,000 coins if you happen to land all five. The game also has Stacked Wilds, and they appear only on reels 1, 3 and 5.

Other than these special symbols and special features, the game has eight normal symbols which form a gradual paytable with the lowest prize for three-of-a-kind of 3 coins, and the highest 50 coins. For five-of-a-kind, the prizes range from 40 to 800 coins, making this a paytable that can issue some nice wins.

Strategy and Tips to beat the Sherwood Forest Fortunes Slot

The game is fun to play, and you’ll need your sound on in order to keep track of the story as it unfolds. The theoretical return to player (RTP) is, sadly, 92.28%, which means the game is no good if you want to make money, and should only be played for fun. There is a remote chance that you might land a good winning combination during the free spins game that has a 3x multiplier and will make money, or will hit that Jackpot Scatter big win, but unless you manage to do either of these the playing experience won’t be rewarding. The best strategy for this slot game is to enjoy it as it’s very fun to play, and to hope for the Jackpot win but don’t count on it. That way, playing Sherwood Forest Fortunes will be enjoyable.