Arabian Tales is a fun and visually impressive slot by Rival Gaming that is themed around the storybook of 1001 nights and offers the players a free spins game with up to 50 free spins, 11 normal and 4 special symbols, including a Jackpot Scatter that can pay 2500 coins! 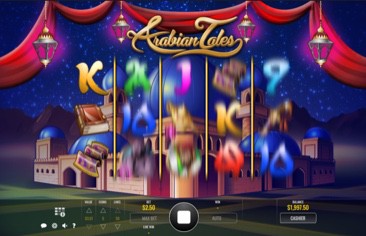 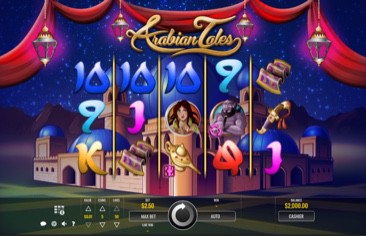 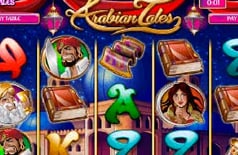 Arabian Tales uses a standard 3×5 board but with a bit less standard setup of 50 paylines that pay left to right. You may choose any number of paylines between 1 and 50, therefore directly influencing the variance of your playing session. Graphics are nice and are done in a style that resembles Disney’s take on this same story, and all the symbols you’d expect to see in a slot themed around it are here, all nicely drawn.

There are 11 normal symbols in the game, and six of them are low-paying card symbols, two of which really pay little. There is another symbol, Book, which can be classified as a low-paying symbol, and Dagger and Flying Carpet are medium-paying symbols. The two main characters pay the best.

Other than these symbols, there are four more special symbols. First of all, there’s the Genie Scatter which is responsible for triggering the free spins game and an Expanding Wild. Whenever a Wild lands on your reels and you’d benefit from the expansion, it will expand to fill the entire reel. Wilds also carry a 2x multiplier. Tiger Scatter is a simple paying Scatter which doesn’t pay much at all, and Jackpot Scatter is the best-paying symbol in the game, paying 2.5x better than the best normal symbol.

Free spins in Arabian Tales have a 3x win multiplier on all wins. You’ll get 12, 25 or 50 free spins for three, four or five Genie Scatters respectively. In general, the free spins game isn’t spectacular, it’s just a way to get some more cash to continue playing the game and hope for a big win that will come sooner or later. This isn’t necessarily bad, as the majority of the payout is readily available in the base game as well, especially in case of Jackpot Scatters which actually is the flagship feature of this game.

Strategy and Tips: How to win Arabian Tales Slots

The theoretical return to player (RTP) is only 95%, which puts this game at the very edge of usability. Classic slots players won’t mind the lower payout since the game offers that Jackpot Scatter that can really pay well, and therefore the award is worth the risk. This is a nicely balanced game that can offer a lot to the player, and any winning sessions will definitely include either a big Wild 2x win multiplier win, some nice win during the free spins game with a 3x win multiplier, or that Scatter wins.

As the Reels Turn

Arabian Tales is actually one of the better Rival Gaming slots, and if we know they don’t usually go above 95% RTP then we can’t ask for more than what we got in this Arabian themed slot.