Golden Gorilla is a jungle-themed slot by Rival Gaming, and it features whopping fifteen different symbols on your reels, two Scatters, and two levels of the free spins game with a 2x and 3x Wild multiplier on those levels. Win up to 250,000 coins! 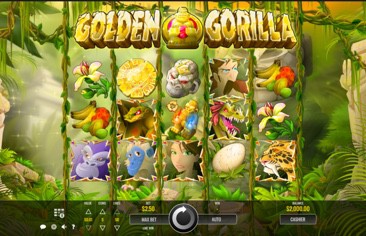 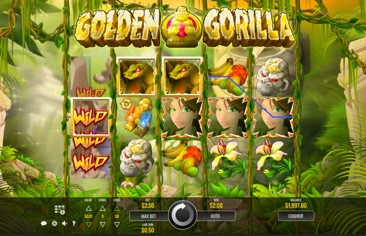 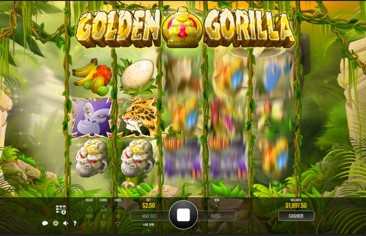 Golden Gorilla has detailed graphics, but the design of the board and the symbols means it’s difficult to differentiate between various symbols as most are drawn in the same palette. The Blue Monkey, the best medium-paying symbol in the game, is easily noticeable, but it’s almost impossible to instantly distinguish between Man and Woman symbols while the reels are spinning. There are five more medium-paying symbols in the game, for a total of eight, and all are drawn in yellowish and greenish tones.

Four best symbols in the game are Jaguar, Dragon, Golden Plate and Gorilla, so that’s twelve regular symbols in total, plus a Golden Gorilla Scatter and a Wild that looks the same as the Gorilla symbol, except that he’s angry. Gorilla Wild will expand to fill the entire reel whenever he’ll form a new win by doing so. During the free spins round, Wild will also carry a 2x win multiplier, and during the Super Round the multiplier will increase to 3x.

The game uses 50 paylines that pay left to right, and you can choose how many lines you want to bet on in increments of 5. Theoretical return to player (RTP) is only 94.20%, which is almost too low to take this slot game seriously. Variance seems to be medium, perhaps a bit high. The Gorilla symbol really pays well for five-of-a-kind, and if you pair that with a Wild win multiplier, you can win big, especially if you form multiple winning paylines with that Gorilla on the same spin. The potential is there, even if the variance of this event is high.

How to win on golden gorilla – Strategy and Tips