Stampede is an African themed classic slot game by Betsoft that features 1024 ways to win and high variance. The game was released in late 2017 and it can award up to 27x win multiplier during the free spins game! 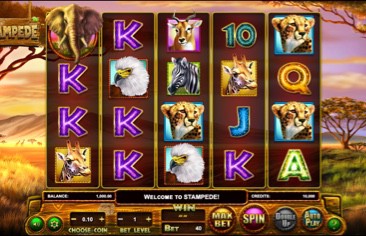 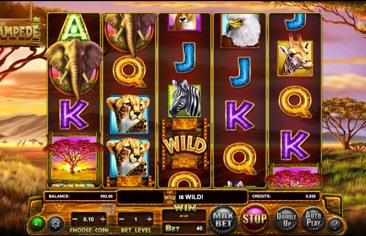 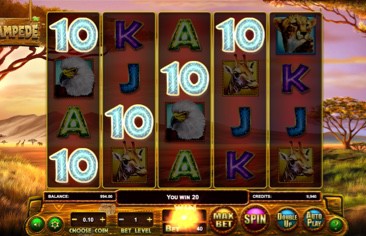 Stampede is played on a large 4×5 board that has 1024 ways to win, which is, in essence, the same mechanics as in 243 ways to win slots, except that you have an extra row of symbols here. You need to have the same symbol on consecutive reels from left to right, starting with reel 1, in order to land a win.

There is a very powerful Scatter symbol in Stampede slot that triggers the free spins and also pays a nice sum in coins. You can get 8, 12 or 20 symbols paired with 80, 400 or 800 coins for three, four or five Scatters respectively. Scatters appear on all five reels. The free spins aren’t too different to the base game unless you’re very lucky, and that extra feature that makes all the difference is that Wilds can carry a 2x or 3x win multiplier during the free spins game, which might bring you some extra cash or even a mega win if everything aligns perfectly. Wilds only appear on reels 2, 3 and 4 during the free spins game, and they multiply each other. If you happen to get all three Wilds with a 3x multiplier, the total multiplier will be 27x.

The game uses eleven normal symbols, three of which are classified as high-win symbols, but only the best one, the Elephant, stands out. The remaining two high-win symbols pay almost the same as the remaining eight symbols. It’s interesting to note that these eight symbols all pay the same for five-of-a-kind, but the difference between them is in three-of-a-kind wins, and here they differ by 4x between the worst and the best symbol.

Strategy and Tips to win big on Stampede

Stampede is not a game in which you can plan to win, but you rather rely on the high variance to produce some mega wins for you. This can only happen during the free spins in Stampede, as the paytable isn’t rewarding enough to give you a big win even with the best of luck. The way to win in Stampede is as follows – trigger the free spins game, get three Wilds on reels 2, 3 and 4, and hope you have an Elephant on reels 1 and 5, as that’s when you’ll get five-of-a-kind to win with the best symbol and 8x to 27x multiplier on that win. In the case of Elephant, which pays 300 coins, the 27x win multiplier would bring 8100 coins. Not a bad proposition at all.